How are vehicles named?

Just as with newborns, vehicle names are lifeless until gifted with the oxygen of a personality. Choosing names for vehicles is a test of originality and perception. A name must carry positive connotations, evoke relevant imagery while not translating into something less flattering in a foreign language. You might say: “Speed”, but the Swedish say: “Fart.”

Porsche, Maserati and Alfa Romeo are renowned for their choice of names. Let’s take a closer look at the history of their iconic names and how they fit the persona of each model.

In 1964, the Porsche 911 was being presented at the prestigious Paris Motor Show, except at the time, it was named after its project design number: Type 901 . Shortly after the show, Porsche was accused of violation of copyright from French car manufacturer Peugeot. Peugeot claimed to own the legal rights to three-digit numbers with a zero in the middle since 1929.

In the middle of the launch phase, there was no time to create a new number let alone new lettering. With the typeface for 9 and 1 already designed, Porsche decided to rename the vehicle “Type 911”. Despite this inauspicious start, the Porsche 911 became a flagship of elegant yet simplistic Porsche engineering perfection and remains one to this day.

Porsche 718 Boxster, gets its name by combining “boxer” and “roadster”.

The Porsche Boxster, first released in 1993, is a combination of words “boxer” and “roadster” that mirrors combination of the boxer engine type and roadster design. The boxer engine type was so named because each pair of pistons moves in and out together, similar to a boxer’s gloves. Introduced as Porsche was on the verge of bankruptcy, the Boxster punched through the market and became a runaway success.

The Porsche Cayman is named after the caiman, a species of South American alligator.

Named after the South American caiman, the Porsche Cayman debuted in 2006 as a snappy relative to the Boxster and the 911. Intended to evoke the incisive nature and agile bodies of its wild namesake, the profile of the Cayman resembles the caimans powerful jaws. With few natural predators, the caiman and the Cayman rule their respective habitats unchallenged. 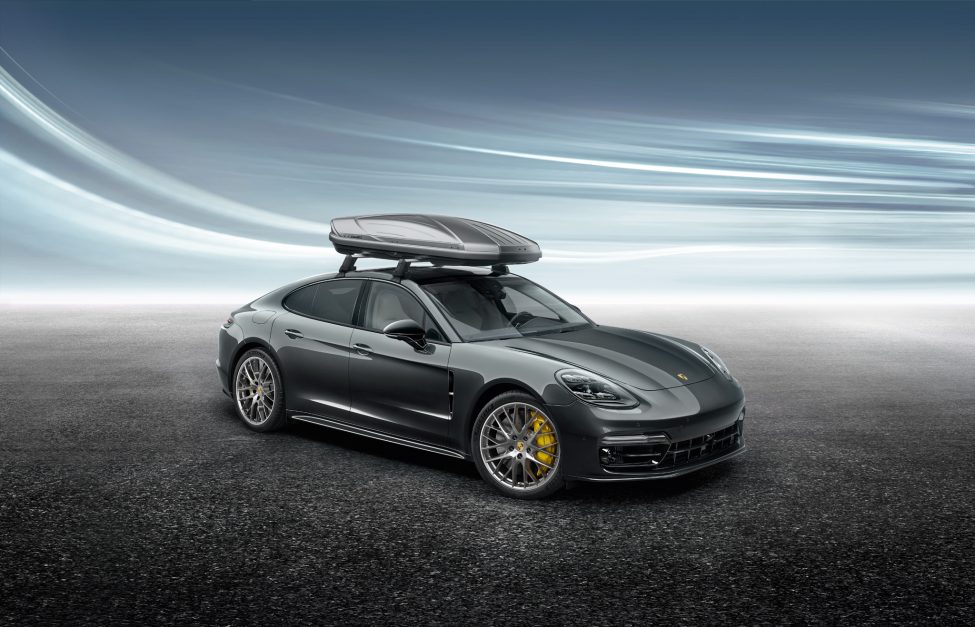 The name of the Porsche Panamera was derived from the Carrera Panamericana.

Unveiled in 2009, the Porsche Panamera name derived its name from the legendary endurance race the Carrera Panamericana. This gruelling race, similar to the Mille Miglia and Targa Florio in Italy, took place from 1950 to 1954 from the Mexico/US border to the Guatemala. The Panamera is a luxury sports car with the unparalleled endurance, speed and reliability required for the Carrera Panamericana.

The bold cooking spice cayenne, was the inspiration behind the name for the Porsche Cayenne.

The 1990’s ushered in the age of the SUV and Porsche needed something new and audacious. Debuted in 2002, the Cayenne was Porsche’s reintroduction into this new vehicle market. The spice cayenne, used in kitchens around the world to kick flavour up a notch, evokes a fierce boldness mixed with fiery adventure embodied in the Porsche Cayenne.

The Porsche Macan model range was named after the Javanese word for the Indonesian tiger.

After the Cayenne, Porsche doubled down on producing an SUV with all of the performance capabilities a customer would expect from a Porsche. In 2014, the Porsche Macan arrived and quickly became the best-selling Porsche around the world. Macan is the Javanese word for the Indonesian tiger. With connotations of suppleness and power, the Macan mirrors the tiger with fierce performance beneath a graceful exterior.

The inspiration behind the name of the Maserati Levante is the powerful Mediterranean wind.

Debuted in 2011, the Maserati Levante was named after the Spanish word for a warm, Mediterranean wind that can change from mild to windstorm in an instant. With the versatility to oscillate between benign calm to gale force in an instant, the Maserati of SUVs assures this mighty power always remains under complete control.

The Maserati Ghibli’s name was inspired by the thermal North African winds.

The Maserati Ghibli, first produced in I966 and relaunched in 2013, originates from the Arabic languages of North Africa. Ghibli refers to the winds that sweep across North Africa, but they are also the nickname for Italian scouting planes. Implying both speed and heat, the Ghibli kicks up dust with the intensity of these desert storms and powers across the landscape at hurricane speeds.

Sometimes names require some work by the listener to uncover the significance, other times it is a more literal. The Quattroporte, first introduced in 1963 with the current model relaunched in 2016, literally translate to ‘four doors’ in Italian. The Quattroporte is straightforward luxury sports sedan with outstanding race bred power, with, if you can believe it, four doors.

The Alfa Romeo Giulia is named after Juliet from Shakespeare’s famous play.

Alfa Romeo is a brand steeped in legend, so it’s no surprise the exact origin of the Giulia is part fact and part urban legend. When the Alfa Romeo 1900 was introduced in 1950, an Italian journalist lamented the lack of elegance by saying he saw “lots of Romeos but no Giuliettas”. This prompted the next generation of smaller Alfa Romeo vehicles to be dubbed: Giuliettas. Then with an engine boost and a design refresh, in 2016, the modern Giulia was born. Alfa Romeo is a brand conceived from passionate artists and romantics so paying homage to any other love story was out of the question.

The name of the Alfa Romeo Stelvio pays tribute to the mountains of Northern Italy.

Entering production in 2016, the Alfa Romeo Stelvio was named after a national park in northern Italy. One of the highest paved mountain passes in Europe, the Stelvio Pass has been declared one of the best driving roads in Europe by driving publications around the world. The tight ‘S’ curves of the Stelvio Pass pose a challenge for everything but the most capable and precise SUV. Alfa Romeo balanced a bold design, boundless comfort and superior handling to create an SUV that can tackle any road that lies ahead.

A name is how a vehicle is introduced to the world so that name must be carefully chosen to echo the individual nature of their character. Porsche, Maserati, and Alfa Romeo are committed to reflecting the true spirit of their models with their choice in names. Every model in each of these brands has its own persona, attitude, style, and performance capability and their names reflect that. Get a grip on winter with Ford’s Winter Performance Packageautomotive, Must Read From the racetrack to the road: the Mercedes-AMG ONEautomotive, Motorsport, Must Read